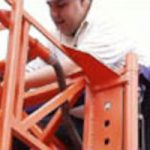 The purpose of the house component of the FCMP is to collect uplift pressure data on the roofs of real residential homes during a land falling hurricane. The portable wind towers are intended to collect velocity and turbulence data for the wind-field as the storm approaches the instrumented houses. Together, the towers and houses provide critical data to engineers developing wind-resistant designs in hurricane prone regions by tying together upper level winds, ground level winds, and resultant forces on homes.

30 homes along the Florida coast have been outfitted to collect pressure data.

The FCMP hurricane data collection teams have been deploying since 1998. House data has been collected for the following storms. More details are provided on the collected data page on this site. Pictures of these deployments can be found at the photo gallery.

Anatomy of a Instrumented Home

Retrofits:
Private homeowners agree to participate in exchange for retrofits to their homes to increase their wind resistance. These retrofits can include a new roof, braced garage door, hurricane shutters, gable-end bracing, and other measures. An inspection of the home determines the individual measures taken for each home. Before any data collection work is done on a house, the promised retrofits are performed on the participant’s home.

Brackets:
Permanent stainless steel brackets are placed under the shingles of the roof to hold the pressure sensors. The brackets are difficult to see without close examination. 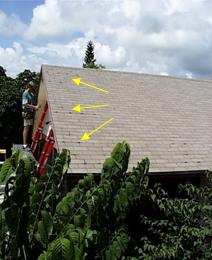 Wiring:
PVC tubing is run under the eaves of the home, housing the wiring that will connect the sensors to the computer data collection system. 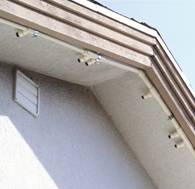 Sensors:
The sensors themselves are housed in an upside-down frying pan for protection, one per sensor. The sensors are not permanently fixed to the home, but rather brought to the home just prior to a storm by the deployment teams, and removed immediately after. Each house is set up to receive about 25 sensors on the roof. Corners and edges are targeted for measurement, as those areas are most prone to the highest uplift from winds flowing over the roof. 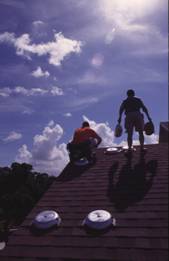 Data Collection:
A computer system is also brought with the deployment team just prior to storm impact, and placed outside the home in a locked metal job-box. This box also contains a backup battery supply in the event that power is lost to the home. 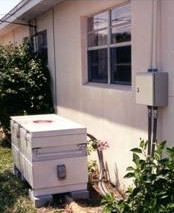